A Weekend with the Amish

I sat on the Amtrak Keystone service from Philadelphia to Harrisburg, watching bleary-eyed as the ugly suburbs gave way to rolling green hills. The previous night I had finished work in Boston, packed up my belongings and hurried to board the night bus to Philly. I spent a grotty night bolt-upright in the stifling upper deck, being herded from one broken bus to another. But soon I was at 30th Street Station in Philly – an echoing hall ringed by stone columns and art-deco hanging lamps – and excited for my weekend with the Amish. 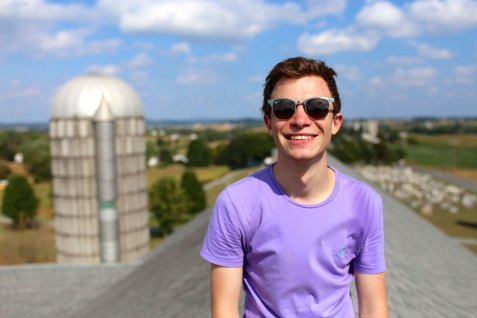 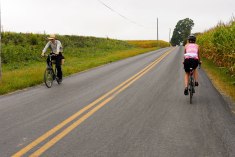 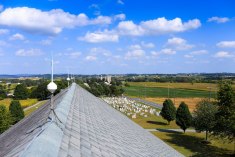 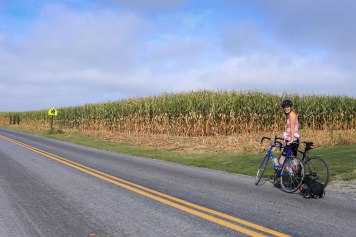 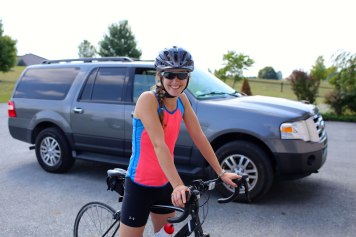 The train slipped past disused steel works and rusting Chevvy pick-ups, and soon the horizon was dotted with silage towers and small farms. I met my friend Cassi in quaint Elizabethtown, an old-fashioned settlement founded by an Irishman at the the western tip of Lancaster County. Cassi’s family farm and veterinary practice is in an idyllic setting. Cows and horses dot the small fields under vast blue skies. We cycled through the countryside and stopped by neighbouring farms to climb their barns; we rode horses and went running in the woods; we fed the cows and chickens. 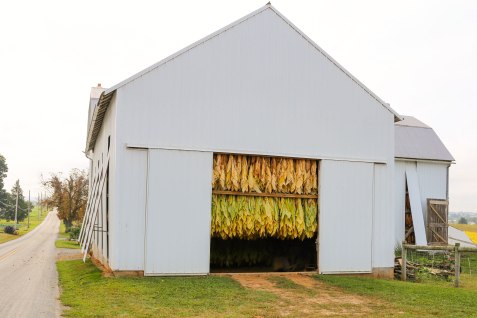 I stopped on my bike to take this photo and saw two Mennonite boys cycling over the hill. I heard the last strains of their conversation in Pennsylvania Dutch as they turned onto a driveway and disappeared. 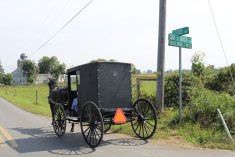 Lancaster County’s economy depends on agriculture, especially livestock and dairy, so it is no coincidence that the area is also known for chocolate factories. The air in Elizabethtown is thick with the sweet smell of chocolate from the M&M Mars factory, but the real attraction is twenty minutes to the east: Hershey. A small factory has grown into one of America’s largest confectionary empires, encompassing workers’ housing, schools, retirement homes, shops, a stadium and a theme park. The visitor centre offers a train ride narrated by singing cows with free chocolate at the end. In the shop downstairs, awestruck Americans pose with 5lb chocolate bars and buy sweets with personalised packaging. The surrounding town has an eerily artificial feel, like a set in The Truman Show or the Zone in Panama. We drove up to the botanical gardens overlooking the theme park, but they were too expensive so we fell asleep on the grass instead. Nearby is the Troegs Brewery, where after a self-guided tour we wedged ourselves into booths for a beer tasting and heart-attack poutine (fries with melted cheese and gravy). 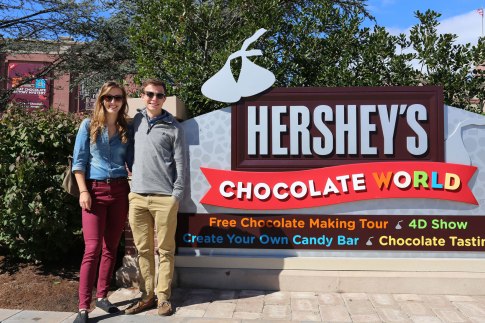 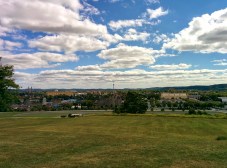 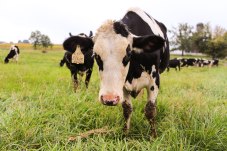 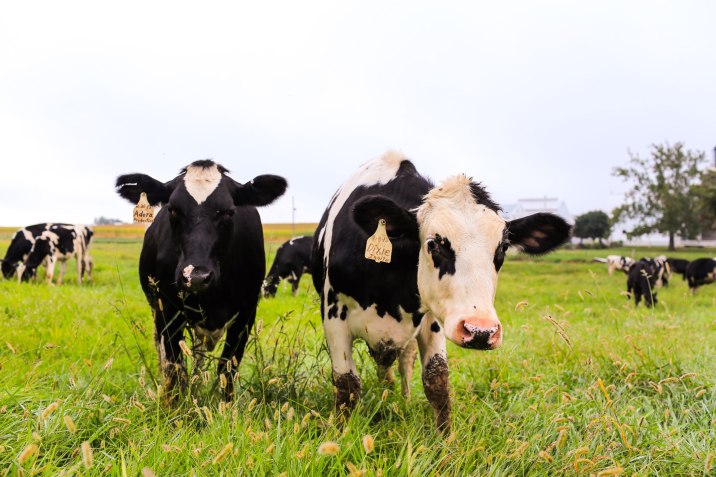 One evening I was lucky enough to be invited to the wedding of one of Cassi’s schoolfriends. Scarcely older than I am, she and her college sweetheart stood on the wooden altar at the the front of their barn beneath a pinewood crucifix, the rafters hung with white gauze and the floors freshly varnished.  Several older women wore Mennonite head-coverings and the preacher gave a solemn sermon about god-given leadership and submissiveness. The couple shared the first dance on the patio behind the house, bordered by cornfields swaying in the wind and golden in the setting sun. We saw them off with sparklers as they drove to their honeymoon in a pickup truck.

The Amish people are as fascinating as they are elusive. Descended from 17th-Century Swiss Anabaptist migrants, now they live simple lives in pockets of Pennsylvania, Ohio, Indiana, Delaware and New York. They eschew modern technology, speak an old German dialect called Pennsylvania Dutch and rarely mix with non-Amish, whom they call English. People in Lancaster County seem to respect but know little about them. It’s fascinating how a community can live in such determined isolation in a country as worldly as the USA.The Anabaptist church has fractured several times to produce a spectrum of religious adherence; many of the less strict groups are called Mennonites.

One Sunday morning Cassi and I loaded the bikes into a truck and drove east to Ephrata, a town in the heart of Pennsylvania Dutch country. We set off in a damp and chilly fog but it soon lifted to reveal endless smooth roads and gorgeous green countryside. We guessed that the Amish were already at church (the location rotates regularly) but the only signs they left were manure on the roads and score-marks from their steel-wheeled horse-carts. Soon, though, we heard wavering snatches of Pennsylvania Dutch as Mennonites cycled past in hats and suspenders. Black carts stood outside open-sided barns where tobacco leaves hung to dry.

Eventually the Amish appeared: glossy black horses leading black covered carts with bespectacled men at the reins beside wife and children. A few returned our waves; none smiled. A Mennonite lady in her garden hurried away when we cycled past. I wish I could learn more about the lives these people lead beyond the hills. On the way back to Ephrata we saw a more moderate Mennonite church. The men, all in white shirts and black trousers, stood chatting at one end of the plain church, while the women milled around the opposite exit in bright gingham dresses and bonnets. And just ten minutes down the road, but many worlds away, we relaxed in a bar for beers and peanut butter pie. 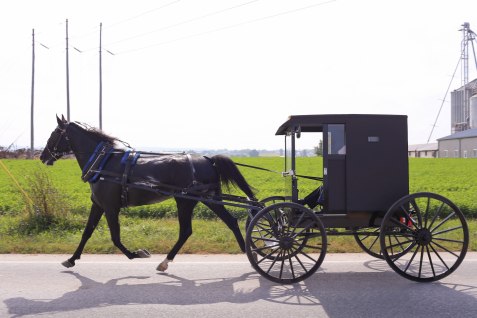 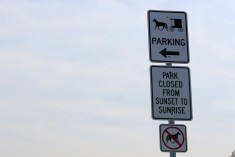 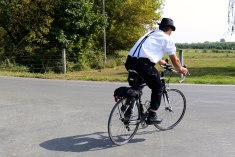 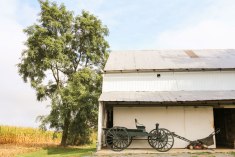 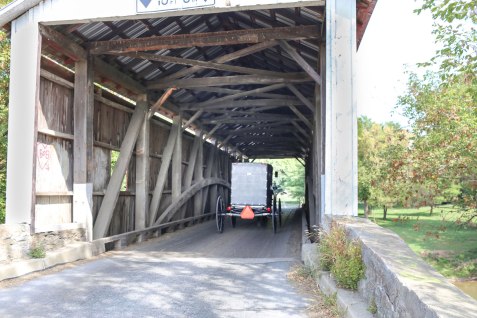 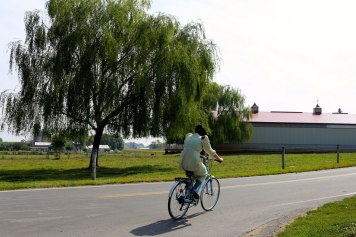 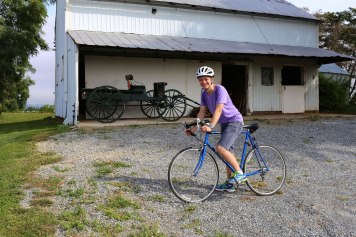