A Journey to the South: Philadelphia to Charleston

There is something about train travel that is quite extraordinary. Aeroplanes are quick, convenient and joyless, an exercise in efficiency and sensory deprivation. You board at some dreary airport, rumble along the tarmac, watch as the ground recedes and, after a few short hours, you land somewhere else and the journey is over. The world beneath the clouds, the people and places and borders, are forgotten. Your origin and destination may be neighbouring cities or poles apart but they are all separated by the same seat-sitting, sky-watching numbness where the journey means nothing at all. But on a train, the journey is yours to enjoy. You watch one place turn slowly into another as the windows become a kind of cinema, the world peels past, the stations come and go and the journey becomes an end in itself. There is nowhere better than a train to enjoy the very experience of spending time going from one place to another, and since my travels by train in China and on the Trans-Siberian Express, I have been addicted to this feeling. 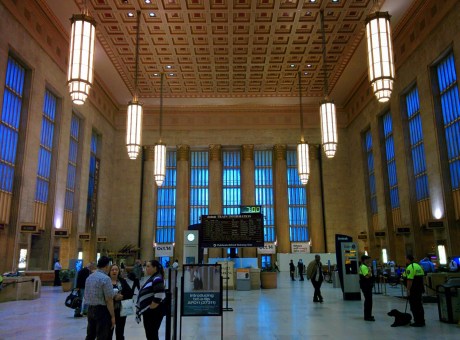 The grand, quiet station was full of people sleeping on stone benches. Stairs led to underground platforms and conductors called out the trains in person. 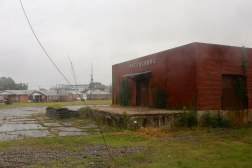 Nothing to do with Russia but things became rather miserable as we passed through Virginia. 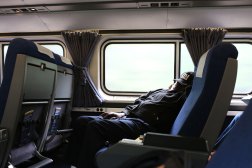 I tried to talk to this man but he went back to sleep. I would gladly have borrowed that hat!

As a rule, most Americans don’t take trains. When you mention your intention to take a 14 hour journey by Amtrak they stare at you nonplussed, presumably ticking off the options in their heads – is he saving money? is he afraid of flying? is he a drug smuggler? is he just weird? – and then, to fill the silence, they mention the last time they took a train journey, probably a subway ride a decade ago. This was precisely why I wanted to travel by train in the US: the trains do run, so who are the passengers? I booked a seat on the Palmetto Express from Philly to Charleston in order to find out.

My train’s route was a study in the diversity of American history and culture. From metropolitan Philadelphia, the oldest city in the US, the train rushes through Maryland, Washington DC, Virginia; soon it turns towards the Deep South and the modern US begins to fall away. I sat in the dining car watching as businessmen and tourists were replaced by men in tweed and flat caps and women bustling with plastic bags full of clothes. We rolled through stations crumbling in the rain and, as if to keep pace with the world outside, the train began to slow down. Next to me, an African-American man snored across three seats, a cap pulled low over his eyes bearing the logo “FBI: Firm Believer in Jesus”. I met a woman from Savannah, Georgia who spent three hours was washing down Lays crisps with orange soda as we passed baptist churches and dank swampland.

I stopped at Charleston, a truly Southern town, dripping in old-world charm and fascinating human history, a place where smartly-dressed people greet you on the streets in a melodious Southern drawl and old men sit under shady verandahs and smack their gums while they drink iced tea. The city was a lovely contrast to the sturdy stone architecture of the northern states, with a beautiful affluent waterfront dotted with antebellum homes. The detached houses had a small entrance on the front which led to a long colonnade running down one side of the house, under which was the main entrance. I liked these two-sided houses where people sat to watch the world go by. Charleston is a college town, too, dominated by a medical university and the picturesque but dilapidated campus of the College of Charleston. The semester had just started: at night, the streets were full of students in togas. 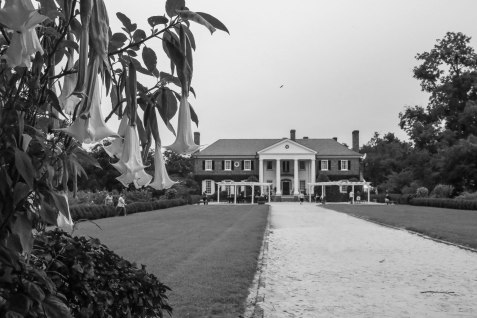 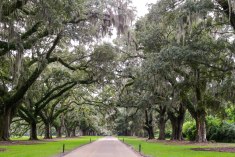 The trees at Boone Hall, draped with Spanish moss like breezy curtains, were more interesting than the house itself. (Not to mention that they would have been perfect for climbing.) 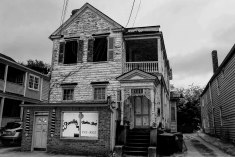 This was a typical tumbledown house, verandah and main entrance running down one side. The barber’s was definitely an afterthought. 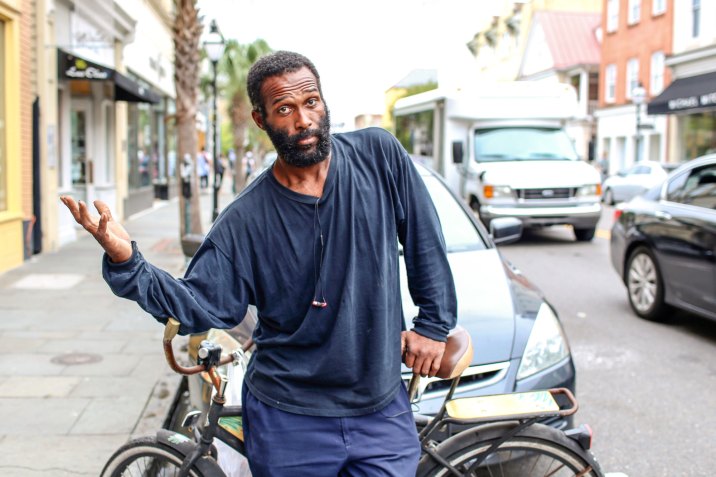 This man ran up to me on the street and offered to crack my back. A few minutes later he struck this magisterial pose for a photo.

I’d been hoping to stay with a Couchsurfing host but things fell through, so I ended up in a hostel. After a summer with Americans, it was strange to be back among the long-haired European and Australian backpacking crowd as they competed over stories about South America and bed-bugs and mumbled their confusing politics laced with dim philosophy.

I did meet two friendly German girls who were on a tour from NYC to Miami – they knew their schedule by the minute (“We must make the ten thirty bus!”). They were flexible enough to invite me to a former slave plantation with them. At the end of a beautiful grove of moss-laden oak trees, lofty and cool like a cathedral nave, stands a brick house with a towering white portico. This is Boone Hall, one of the longest-operating plantations in the US and a popular film set, a place where today tourists wander through sweet-smelling gardens but two hundred years ago, African slaves in chain-gangs picked cotton. Behind the oak trees lies a row of one-room brick huts where the slaves lived. Two centuries is not a long time and the fascinating effects of slavery are still powerfully reflected by deep social differences and strong cultural pride, including the Gullah language which is still spoken in snatches along the coast.

The Atlantic in South Carolina is warmer but no less fierce than in New England. One moment the southern seas boast dolphins and popular surfing at Myrtle Beach; the next they are whipped into terrible storms like Hurricane Hugo, which flattened the expensive holiday homes near Charleston in 1989 (naturally, they have all been rebuilt in exactly the same place). The sea has shaped much of Charleston’s history, especially during the Civil War, the first shots of which were fired in Charleston harbour. I remain a bit ignorant of all this post-colonial history and it took me a while to discover that Charleston town is named after one of our monarchs, too. I visited the waterfront battery in an attempt to learn more but fell asleep after too much toga partying the night before. 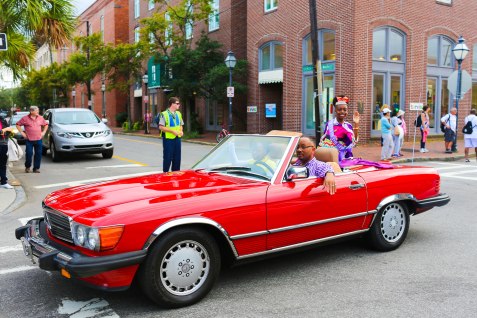 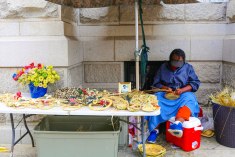 The descendants of South Carolina slaves are bound by a strong Gullah culture: weaving baskets with palm fronds was one of the skills they exported from Africa and developed in the plantations. 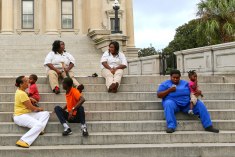 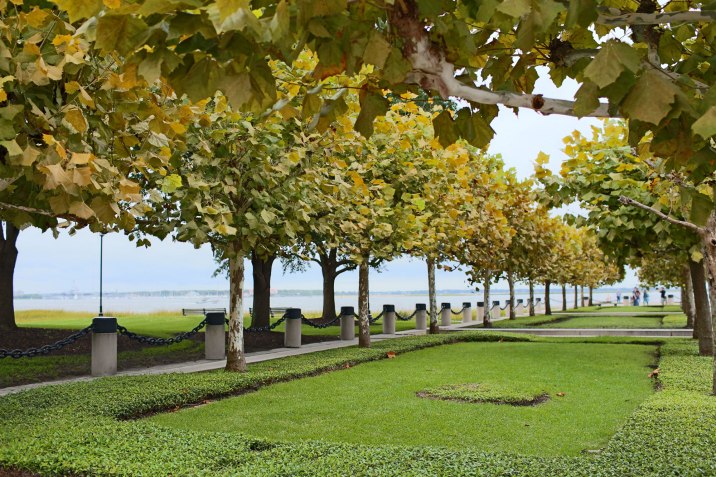 I was sad to leave Charleston, a place of manners and mansions, my first experience of a South that is as divided from the rest of the USA as it is divided within itself. Although I had originally planned to make my whole trip through the South by train, logistics got the better of me and I found myself at midnight on a cockroach-infested Greyhound bus heading westwards. Never mind: my next stop was the high-roller home of hip-hop – Atlanta, Georgia.