Head over heels for NOLA

New Orleans has a character like no other city in the world. From the French Quarter to the swampland, chicken po’boys to crawfish étouffée, hip-hop to Jazz, poverty to privilege, this city combines old-world culture with new-world hedonism and turns it all into a party. 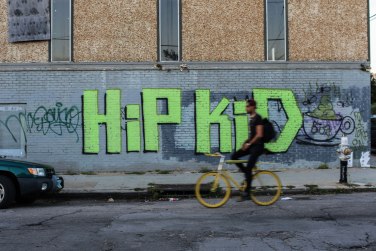 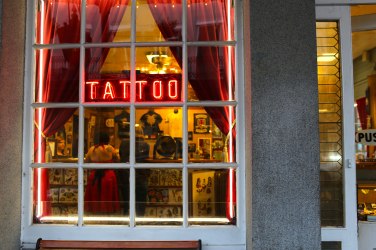 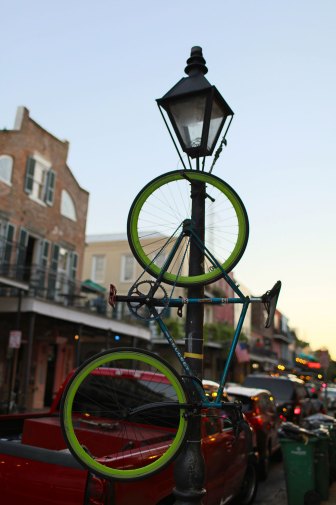 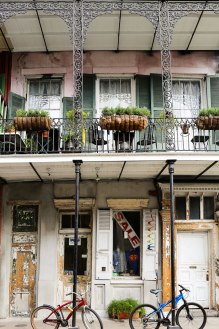 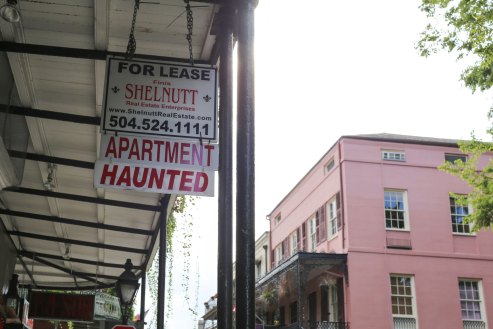 NOLA is a city with many faces. Ravenous after a long bus ride from Atlanta, I took the rumbling streetcar along wide Canal Street and went into Popeye’s Louisiana Chicken to escape the rain. A jazzy version of Oh, when the saints… started to play as I ordered my chicken and, through the window, I could see fat tourists with cameras and plastic tubes of cocktails, Japanese businessmen sweating in suits, old men in bling beating their canes on the pavement. Opposite me, a fat black girl and her friends were chatting in Creole, the French vowel sounds unmistakable as the chicken spilled from their mouths. Another man sat whistling at girls as they walked into the restaurant.

Down the road in the Cathédrale de St Louis, at the heart of the French Quarter, I admired ornate carvings and stained glass, strikingly diffrrent to the warehouse-like churches I saw in Georgia. The air was cool and quiet, an escape from the raucous sounds of the city which burst in from the the street, mixed with the brassy sound of jazz, each time the door was opened. But the French Quarter seemed horribly sterile at first, a touristic artifice that was like a Disneyland version of France. At night, too, the famous Bourbon Street was just another faceless, seedy nightlife strip.

I gave NOLA another chance, escaped the tourists, and only then did I see that the city really does deserve its reputation. In Frenchman Street, live jazz and swing spilled out of tiny bars as people danced until the early hours. The music was sensational at the Spotted Cat, the crowd electrified when a white-haired hippy wandered up to the stage,  pulled a clarinet from a burlap sack and began to jam with the band, his eyes closed like some mystic prophet (or just a drunkard). 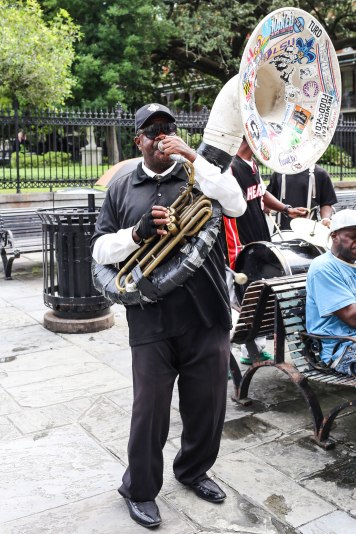 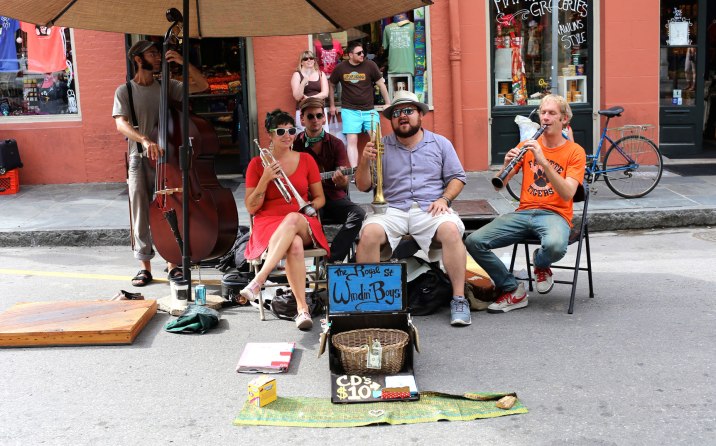 Further east and across the sluggish Mississippi were decaying colourful neighbourhoods like Tremé-Lafitte, dotted with crumbling cemeteries and crisscrossed with highways. Beyond the casinos and hotels of Canal Street, the city’s unassuming chaos makes it charming. In the west, too, past the mansions of the Garden District, you find Tulane University and Loyola College sitting side by side and students fill the streets at night. We stayed at Tulane eating fried chicken in an underground cafe until the sun came up.

The food in New Orleans is as excellent as it is unhealthy. I feasted on fried catfish and jambalaya, po’boy sandwiches dipped in fat, chicken and collard greeens and cornbread. There was Neyow’s Creole Café where old ladies gossipped over gumbo cups and Arnold Palmers (half iced tea, half lemonade); there was the famous but rather unapetising Mother’s which featured in Man vs Food; and Napoleon House, a dingy and dilapidated cafe noted in 1001 Places to See before you Die for having the best sandwiches in town. On my last night I sought out Deanie’s Seafood Spot for aparmesan-grilled oysters on the half-shell and an enormous crawfish platter: sitting at the bar I met a golf-course engineer from Detroit who told me he would never leave the city, even though half his friends already had.

While wandering east of the French Quarter I had one of those serendipitous moments that make travel worthwhile.  Passing a park, I heard the microphone boom of a pastor preaching from a scaffolding stage. His hands spread wide, he wore red trousers and a billowing silk shirt and preached rhythmic poetry about hellfire and salvation. The impromptu congregation swelled in time with his words and echoed his cries, “Praise Jesus!” and “Hallelujah!”

It was a special sermon for the House of Faith Non-denominational Ministry. Later the pastor stepped off the stage and exhorted people to “receive Jesus” with him. First forward was a crying tramp, his clothes in tatters. The pastor began yelling in tongues and held the tramp with outstretched arms and shook his stomach as he wept and fell to the floor beating the ground with his fists. Another lady stepped up and the process was repeated. Each time the pastor, a powerful performer, played the fortune-teller’s act of guessing the ailment – “Family? Income?”. If only I coukd have accepted his invitation to the church service the next day. 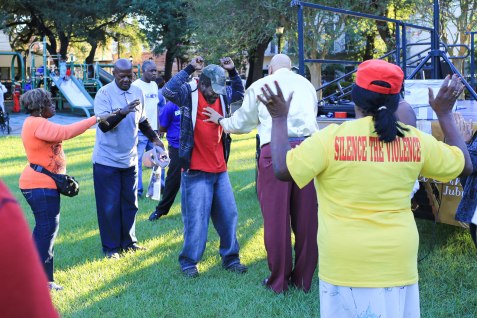 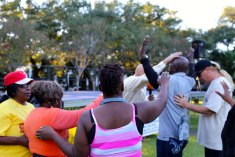 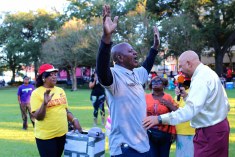 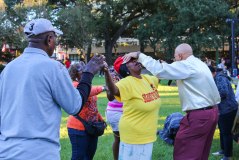 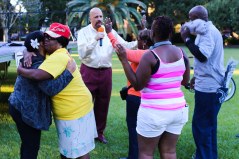 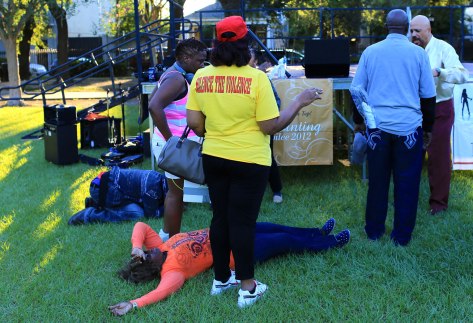 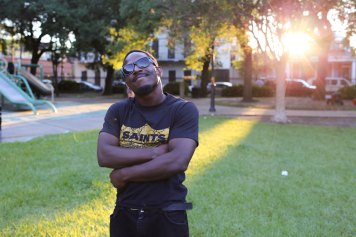 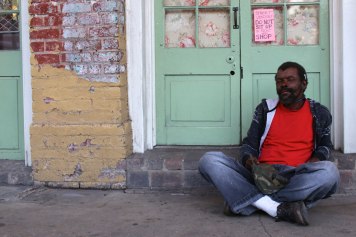 There is more to New Orleans than the city itself. Indeed, each year the city shrinks as the waters rise to reclaim the floodlands of the Mississippi delta. Tourists are taken by the busload to swamps on the other side of Lake Pontchartrain, where they pile into motorised boats and take selfies as guides throw hot dogs and marshmallows at alligators. Circus is not my thing but I did want to see the swamps, so I found an outfit called Wild Louisiana that runs kayak tours.

A group of five, we climbed into our kayaks just as the rain lifted to reveal the riverside entrance to a dank, cloying world of primordial trees, their roots rising out the water like the knees of giants and moss and vines trailing down into the mud. The silence was broken only by white ibis lifting off as we turned each corner through the maze of channels and mud banks. We passed a few cabins slipping into the swamp – who lives in these murky backwaters?

NOLA was my last stop and I was reluctant to return to the chill Massachussets autumn. Still, going straight from the French Quarter to the airport at 6am probably wasn’t my brightest idea…