Into the boonies: Milledgeville

I was staying in rural Georgia with a Guatemalan professor. Myron and I had spent the afternoon in Milledgeville chatting about politics, drinking coffee and swimming at a secluded spot in the shadow of the Sinclair Dam. Drying ourselves off as the sun was setting, we decided to drive to the commercial centre – a cluster of shops off the highway – and bought beer in one-gallon glass growlers. With the car fully stocked, we popped over to Walmart to pick up some fried chicken.

On the way into the supermarket I strolled past a typical supersized American family. This wasn’t my first trip to Walmart and I took little notice of them until Myron nudged me and whispered, “Maybe you don’t know them but these are local celebrities.” I turned and stared, my eyes darting from the obese mother to the slouching man and, finally, coming to rest on their spherical little daughter: it was Honeybooboochild! 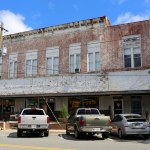 I was wild with excitement.  Myron went off to do the shopping while I hunted for reality TV’s most famous family – Mama June,  Sugar Bear, Honeybooboochild,  her sister and  a chaperone – in the produce aisles. I knew they would be near the butter.  Eventually the group split up and I swooped in on Honeybooboo alone with her minder to ask for a photo. Arms akimbo, looking like a blonde-haired Michelin man she shook her head, grandiosely telling me that photos in Walmart were forbidden.  I gave my sweetest smile and asked again in my best British accent.  “You came all the way from England?” she asked, her eyes wide: and with a nod from the chaperone, I leant down next to Honeybooboochild for the greatest selfie of my life.

Milledgeville is the kind of place that gets forgotten on maps. From Atlanta, you drive two hours south-west through the dew-heavy air of the Oconee National Forest until the city cars give way to pickup trucks and tractors and eventually there is no traffic at all. I crossed deserted covered bridges on dirt tracks, the timbers steaming in the rain. Civilisation dissapeared into the mist; other than the occasional faces staring out from armchairs on tumbledown verandahs, I saw no-one. Milldgeville was once the state capital but now has the atmosphere of a sleepy, time-forgotten outpost. Its one-block centre is dominated by the pristine white campus of the liberal arts college where Myron works (which, according to him, is 70% female!). I would have loved to to explore the surrounding towns in Georgia’s Lake Country – places with unusual names like Athens and Sparta, some like McIntyre where the Honeybooboo family used to live before they made it big.

Even by the standards of Couchsurfing hosts, Myron was quite a character. Generous and free-spirited, interesting and enigmatic, he lived in a bungalow on the outskirts of town with a bizarre pair of lodgers: Lazarro, a mysterious Cuban-American-Italian who worked at the local Home Depot, and Alec, a towering man with beard and long hair whose passions are Mediaeval reenactment and Steampunk. Dinner was like Fawlty Towers. Alec, just back from Arizona, stood packing the freezer with paper parcels of venison while Lazarro guarded the spaghetti pot like a Sicilian nonna. We sat down to eat, Lazarro still shirtless, and Alec’s eyes blazed with passion as he told us his precise plans for cornering the market in male corsetry (really). Later we chatted Italian politics on the porch and drank Kentucky Bourbon ale. My departure came all too soon the next day. I can’t wait to go back to somewhere in the middle of nowhere.