North of Brisbane is the town of Noosa, sandwiched between golden beaches, a meandering river and lush national park. Compared to grotty Vegas-style resorts like Surfers’ Paradise, Noosa was pretty and upmarket. Yet it is also a stopping-off point for one of Australia’s greatest natural wonders, Fraser Island.

Fraser is the world’s largest sand island, boasting 120km of deep windblown sand supporting rainforests, mangroves, dunes and impossibly pretty beaches. There are no roads apart from the main beach itself and a few overgrown tracks through the forest. I hadn’t the time to visit on my own so I swallowed my pride and joined a small tour company called Dropbear Adventures. 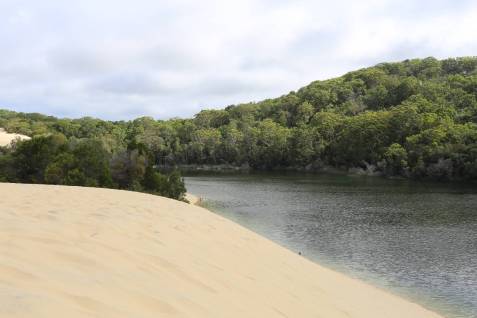 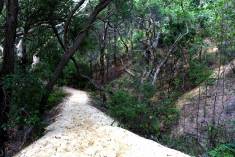 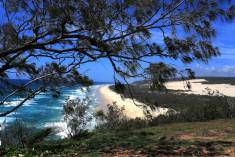 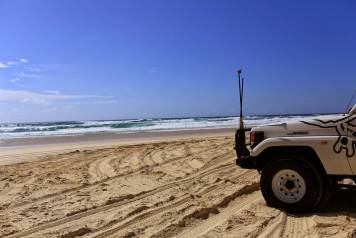 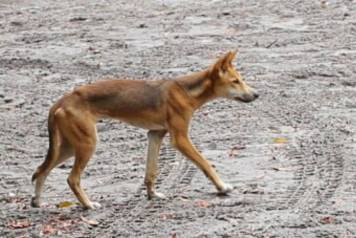 For three days we camped on the beach, exploring seventy miles of dramatic coastline, shifting sandblows, refreshing creeks and hidden lakes in sun-dappled prehistoric rainforest. There was Lake Allom, an acidic lake with soft red-tinged water, Lake Wabby, a former river bend swallowed by sand and forest, and Champagne Pools where huge groups of tourists sat among the waves. Driving Land Cruisers through the soft sand was great fun. 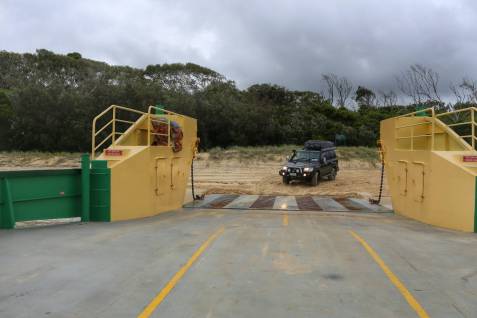 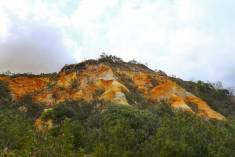 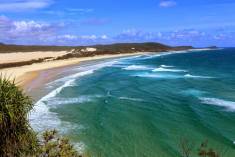 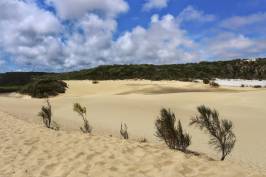 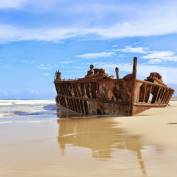 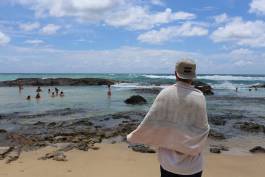 Tours aren’t usually my thing but I was pleasantly surprised. More a social experience than an adventurous one, I saw more in the time than I could have seen independently but it all felt rather hurried. As soon as I arrived somewhere, so did fifteen other people, making even the deserted spots busy; nonetheless, it was a fine introduction to a stunning place. After another quick stop in Noosa, I took a Greyhound bus north to Airlie Beach. It was time to work on my tan.

The Whitsunday Islands have long been a bright speck on my travel horizon, but it was quite a surprise when they suddenly came close and materialised into a few carefree days’ sailing and sunbathing. A group of largely deserted islands off the Queensland coast, just below the southern fringes of the Great Barrier Reef, the Whitsundays have a rightful reputation as one of the world’s ultimate destinations for sailing and cruising.

Airlie Beach, a touristy harbourside town full of hostels, sunburnt backpackers, bottle shops and sailing supppliers. Like Noosa, it was clear that a bit of money goes a long way in diluting the grotty backpacker scene.

The sailing was all that I had hoped for: in three days on board a sleek ex-racing yacht called Iceberg we hopped from island to island amid turquoise waters, dazzling beaches and fine company. The squeaky-white beaches and windblown lagoons were still captivating even after having seen so many. Unfortunately the Australians are gripped by a strange paranoia of marine jellyfish so we were forced to swim in ridiculous lycra ‘stinger suits’. 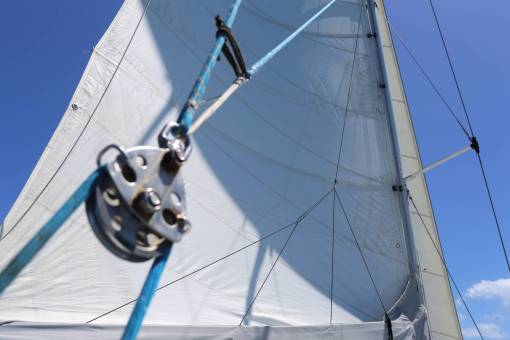 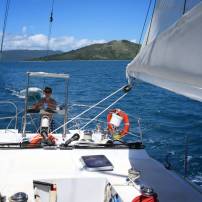 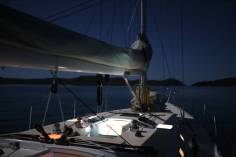 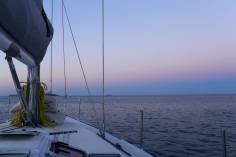 Dusk over the Whitsundays 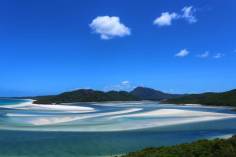 With the end of my Australian adventure in sight, I picked up the pace and hurried north to visit Mike, an old diving friend who has begun a PhD in Townsville. We shared stories and explored; one day I drove down the coast to dive the famous SS Yongala (the dive itself comes highly recommended, unlike the dive centre, Yongala Divers, which was based in a miserable backwater called Ayr and was frankly terrible).

Townsville itself was sweltering and sleepy, heat-engulfed, heat-faded, heat-trodden. I spent my days dozing on the beaches (within the stinger enclosures, of course) and enjoying the views of nearby Magnetic Island.

I finished my trip in touristy Cairns. Here Japanese tour-buses unload at camera shops and travel reps hassle you in the street for snorkelling trips. Even the coastline is a surprisingly ugly series of muddy wetlands that appeals only to the swarms of twilight twitchers with telephoto lenses and binoculars. Yet all this is a sideshow to what lies offshore: the Great Barrier Reef.

I joined a cheap and cheerful three-day liveaboard with Pro Dive Cairns. The diving was good but not spectacular, as was probably to be expected at only three hours’ sailing from Cairns. Despite miserably stormy weather at sea, the company onboard was good and the diving terrifically easy. My fellow-divers included a sixty-year-old former bodybuilder called Dennis, a American couple who had won their flight tickets at a Chicago Bulls game, and a former futures trader who had become a golf coach. In the evenings we sat around indoors, sheltering from the rain while Dennis showed off his muscles and his wife looked on with practised patience.

It wasn’t long before my last night in Australia, when I gorged myself on civilisation and, armed with a lifetime’s supply of DEET to fend off dengue, I flew back to Gili Trawangan to settle down and do some work.