Buffalo and burials in Tana Toraja

The Toraja people live for death. Funerals are enormous week-long events attended by thousands. Families store the bodies of their elders for years until they have saved enough to hold a lavish ceremony. The funerals are closely guarded but tourists pay to attend with guides. My Dutch companion Gijs and I did things the old-fashioned way.

Please note: some of the photographs in this post are gory.

We asked around until we were tipped-off that there may be a ceremony near a village called Sa’adan where, riding around on mopeds, we found a lady in a cabbage patch who pointed us to a long line of locals in black marching up a driveway. Joining the line, we emerged into a clearing to see a special sight: a thronging yard ringed with eight or ten lofty ark-shaped haus tongkanan. Each traditional house was packed with elders and excited children. In the middle were fifteen fine buffalo, numbers painted on their sides, nervously toeing the dirt while a crazed shirtless man danced around them with a spear. 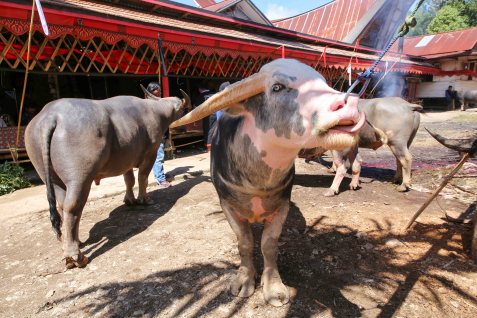 The whiter the buffalo, the higher its value 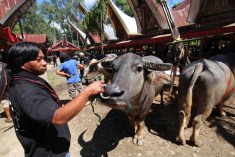 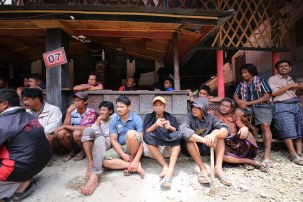 Men sat to watch the buffalo being slaughtered 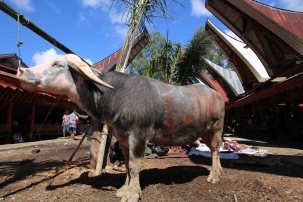 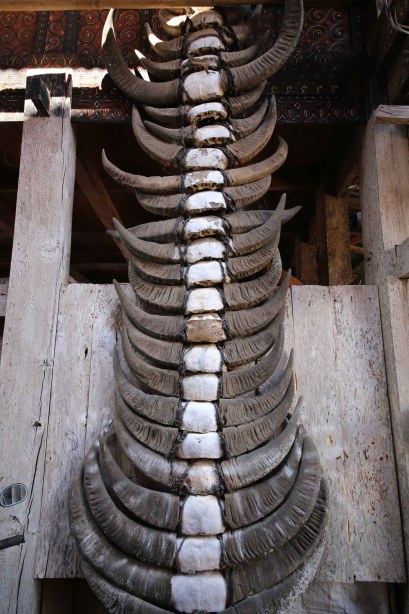 We did our best to be invisible as a group of cross-legged elders began to sing and the crowd filed past them, dropping donations of money and cigarettes into a bowl. Suddenly there was a roar: the shirtless man had slit a buffalo’s throat. We heard the hollow, gasping, sucking noise as blood gushed from the neck and the buffalo staggered around, one leg tied to a stake in the floor. Eventually it crumpled in a bloody heap. The crowd giggled and cheered. 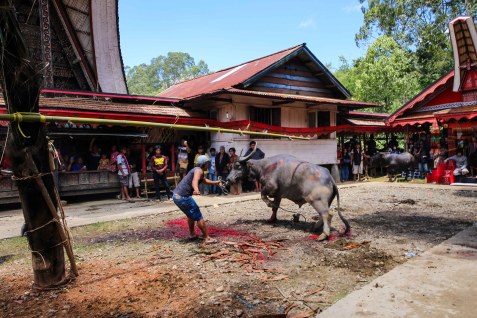 A buffalo in its death throes broke free from the rope tying it to the ground and charged, blood spraying, towards the seated crowds. It fell to the ground before reaching them.

We watched transfixed as another ten buffalo were slaughtered, sometimes several at once thrashing on the bloody ground. Once a buffalo broke free from the rope in its death throes and charged at the crowd, but collapsed in a frothing heap just before the enthralled family. An efficient team butchered the animals and fed the meat straight into a metal cauldron over a wood fire. By the end, the yard was a bloody, sweaty mess of skin, hair, muscle and intestines. It was a powerful, disgusting, memorable spectacle. 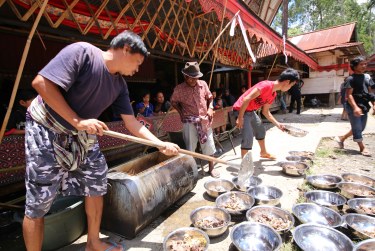 The meat was stewed and served for lunch 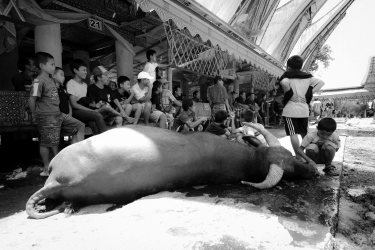 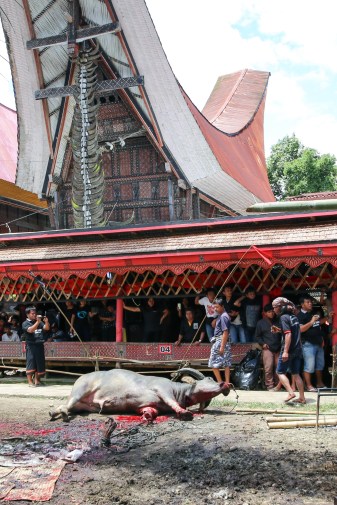 Somehow we didn’t fancy lunch; so we rode back off into the sparkling paddies. It wasn’t long, in this region that lives to die, until we found a funeral procession blocking the road.

The Toraja believe that bodies must be shaken on their way to the grave to rid them of evil spirits. And so we watched as a squad of young boys laughed and screamed while they played tug of war with a bamboo frame holding the coffin, all the while being chased uphill by grim-faced elders. At times, the boys abandoned the coffin and play-fought, splashing and cheering in the mud. It didn’t seem like a funeral at all. The coffin was eventually slid into a chiselled hole in he rock-face. 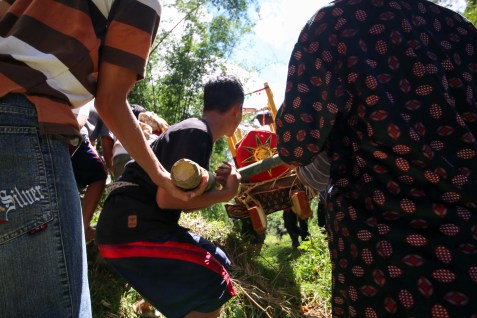 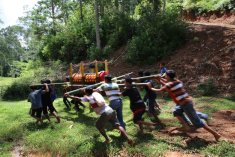 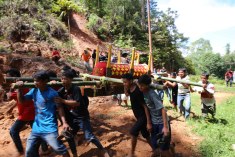 On another day, Gijs and I swept past the tree-graves at Makale and cliff-graves at Lemo in search of Londa, site of some spectacularly spooky burial caves. As pouring rain sluiced down the limestone cliff-face, we squeezed past rocks covered in skulls, coins or cigarettes stuffed in their eye sockets. Onwards past piles of decaying coffins in a warren of small grottoes, we found a crawl-way which led to a muddy tunnel, and eventually we emerged in a cathedral-like cave full of only bats and the glistening eyes of spiders. The region must be full of cave systems like this. I can’t wait to return one day with a spare torch.

Near the caves is a church where we sheltered from the rain and joined a female congregation to sing an Indonesian version of “Amazing Grace”. Tana Toraja is a place not to be missed.