Into the heart of Sulawesi

A hike in the mountains

It was Good Friday in a world of glittering rice-paddies, smiling children, animist churches, ritual buffalo sacrifice and skull pits. High up a slippery twisting track in a village called Lorai, locals trooped through the mud to a fog-shrouded church with Bibles tucked under their robes. All I had was a sketch map, already soggy in my trousers; no one seemed to know the name of the next village, let alone the distance. I set off walking up the hill.

A week before, I had taken a long coach journey up the road that leads north from Makassar. For ten hours I sat snacking on snake-skinned salak fruit while the Indonesian lady next to me vomited in a plastic bag. It didn’t matter: I was heading to Tana Toraja, the cultural heart of Sulawesi. 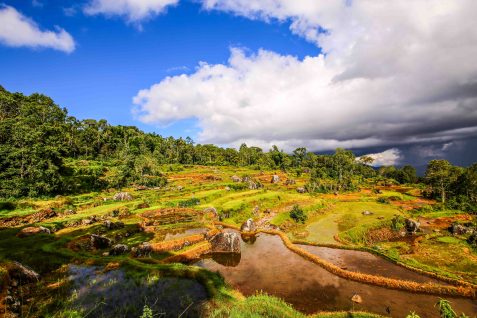 Rice padis in the tropical sun in Toraja 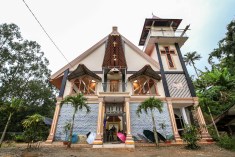 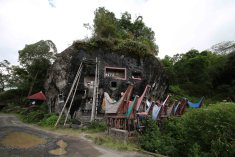 Boys at work in the low padis

Baby graves in the forest

Missionaries in the jungle

Tana Toraja is an artefact of history. By the 19th century, the Dutch East India Company controlled the southern coasts of Sulawesi, using its stronghold in Makassar to control all trade in the Spice Islands. Yet it was Protestant missionaries, especially the Salvation Army, who completed the colonisation of Sulawesi when they pushed north through the central highlands. Fiercely independent and culturally distinct, Toraja was the hardest region to subdue.

I arrived in Rantepao, the main Toraja town, and spent a few days exploring with mad Dutchman Gijs. At night we earned free meals in roadside warungs by singing snippets of the latest Indobeat hit, Sakitnya tuh disini.

Back to Good Friday. As I walked uphill from Lorai, children shouted at me from doorways, “Belanda!” – Dutchman, the local word for a white man. Lost and soaking somewhere north of Beruppu as the heavy equatorial night fell, I ducked into a farm and was standing under a shelter when a teenager and his small brother approached me. They invited me into their warm hut for kopi and that Indonesian delicacy, plain instant noodles with white rice. I shared a pack of chocolate bourbons in return.

I spent the night in their creaking haus tongkanan, shivering on a floor mat beneath a TV playing flickering images of the Bali Nine preparing for their execution. Bali seemed a world away. Opposite me on the floor lay an ancient old man, introduced only as opa, grandpa, curled up in a silent ball. 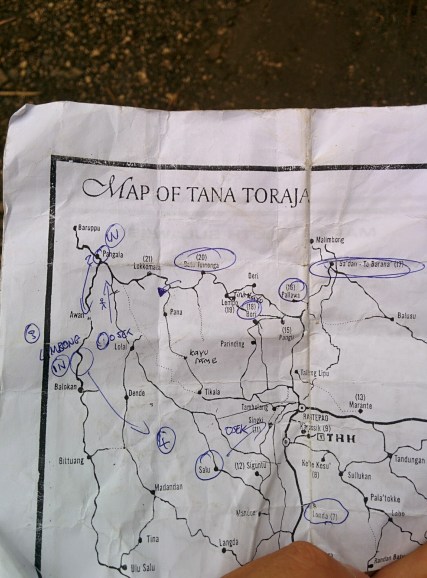 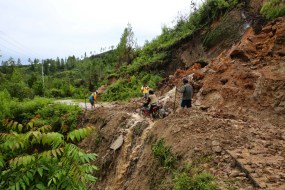 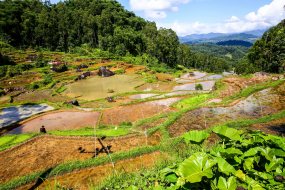 Sunshine before the rain 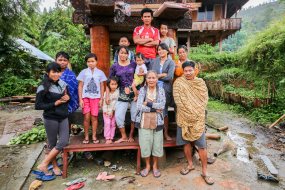 The next morning, after more white rice and a photoshoot, I set off up the mountain road which had half-collapsed overnight and reached bustling Beruppu. The sun burnt away the cloud to reveal beautiful cloud-bound peaks. The cheery villages said Pulu Pulu wasn’t far. It took me four lonely hours, struggling in the blazing sunshine over a steep and crumbling pass, to reach the next valley from where I could look down on Pulu Pulu as I wet my face with puddle-water. On the way into the valley, I met a blank-faced goatherd who watched me pass in silence.

Pulu Pulu was peaceful and beautiful and there I met Cornelius, a devout and kind-eyed Torajan who introduced me to his young family. After another meal of rice, we set off with his bike to make the long journey back to Rantepao. It was time for me to continue my journey east, leaving behind this cultural enclave to go to the eastern edge of Asia: Jayapura. 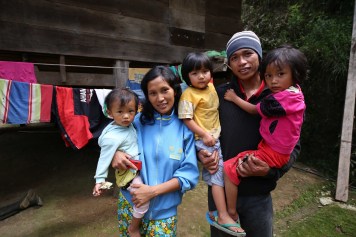 Cornelius and his family 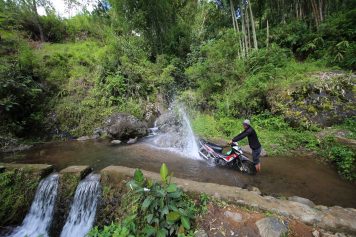