I heard deep groans from the belly of the ship as I climbed the rusty stairs to the decks. Down an oily passageway, past a kitchen reeking of rotten meat, I found the heavy door and stepped into the fresh air on Pelni Boat KM Tilongkabila.

Buy tickets immediately before you travel; boats are cancelled all the time.
Ask around or consult the tea leaves for a schedule. Remember the name of the boat you want to book.
Arrive early to find a bed; bring something to sleep in.
Bring food. 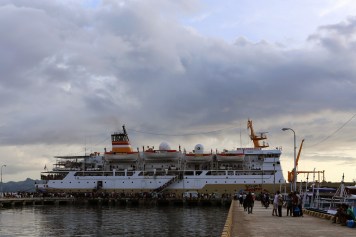 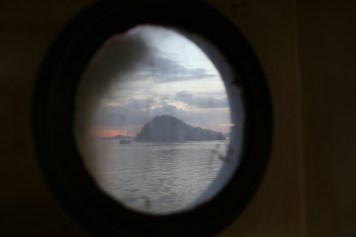 The Pelni boats seem to sink more often than they turn up on time. Operated throughout the archipelago by Indonesia’s national shipping company, this crumbling fleet of twenty-six ferries (at last count) is most Indonesians’ only option for island crossings, even after the advent of low-cost flights. I had heard they were filthy, unreliable and dangerous – so I couldn’t wait to get on board. The travel news is filled with sinking stories like this.

Surviving the journey was only half the challenge. It took a day to find the ferry office in Mataram, Lombok for a timetable. In Labuan Bajo, on my fourth visit to the ticket shack, up a backstreet behind the mosque, I managed to buy a ticket.

The ship arrived at Labuan Bajo several hours late. Thousands of Indonesians thronged on the concrete jetty, laden with plastic bags and soggy boxes, all jostling for a place on board. In the crowd I met Gijs, an enthuastic Dutchman and the only other foreign bule on board. Economy class was a series of cavernous halls with rows of wooden sleeping platforms. Gijs and I found two mats as close to a grubby porthole as possible. 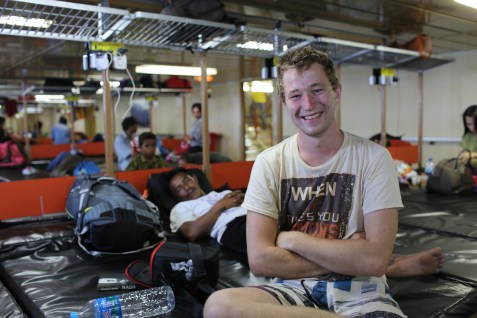 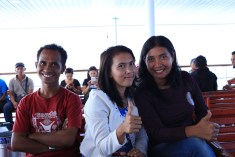 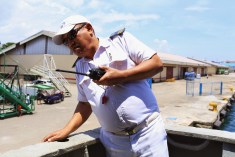 This officious member of the crew insisted I take a photo of him when he looked like he was working, just as we came alongside in Makassar

In the event, the journey was a pleasant surprise. Compared to the four-day mosquito-infested freight ferry across the Caspian Sea that I took in 2013, the open cabins were palatial. People were far friendlier than in conservative Lombok and Flores. They were eager to share jokes and snake-skinned salak fruit; I spent hours posing for photos with a travelling school band. By the second day, everyone came on deck to avoid the stench of raw sewage from the heads. Each passenger had a fascinating story. There was even a cinema on board!

One evening in Labuan Bajo, a Russian diver and I had come across a local man sitting outside in the pouring rain, his forearm bleeding profusely. I bandaged him up with his shirt and we sent him off to the hospital. He bumped into me on the Pelni ferry with an armful of shoddy black stitches. Apparently he had worked as a jeweller in Bali but went to seek work in Makassar after the 2002 bombings. He thanked me almost as profusely as he had been bleeding a few days earlier. 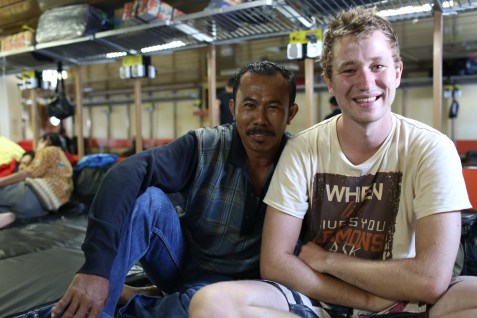 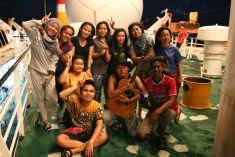 These kids, on a school trip, were spending the night on the cool upper decks. 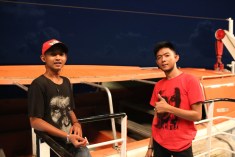 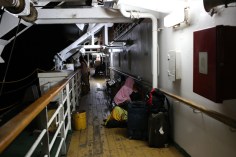 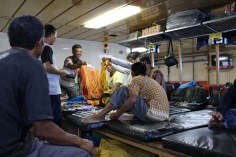 Clothes for sale down below 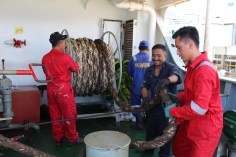 At work at the dock

After a two-day journey, and without ceremony, Gijs and I found ourselves on the dockside in sweltering Makassar. Hailed by locals from all sides, we set off into the pulsing, historic streets of Sulawesi’s boom town.