Jayapura, the gateway to Papua

Jayapura is a city like none other in Indonesia. Just over the border from Papua New Guinea, the city is a tense melting-pot of Indonesian, Chinese and Papuan culture, a forgotten hotspot in the steaming jungle. Jayapura is a frontier on the furthest reaches of Asia, a place where ancient history and modern geopolitics combine on the doorstep of Melanesia.

After a thrilling adventure in otherworldly Tana Toraja, West Papua was my final stop in Indonesia before crossing the border to PNG.

Indonesian Papua has a troubled past. Forming the western half of the island of New Guinea, the world’s second largest island, Indonesian Papua (which, confusingly, comprises two provinces – Papua and West Papua) has been controlled by Indonesia since they wrestled it from the Dutch in the 1960s. 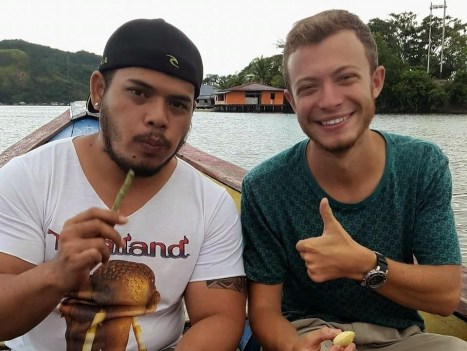 My Couchsurfing host, Indra, and I on Lake Sentani 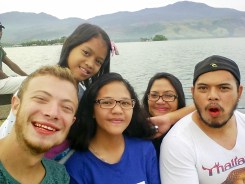 Chewing penang with the family on Lake Sentani 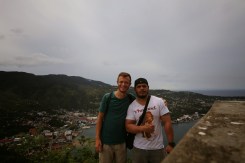 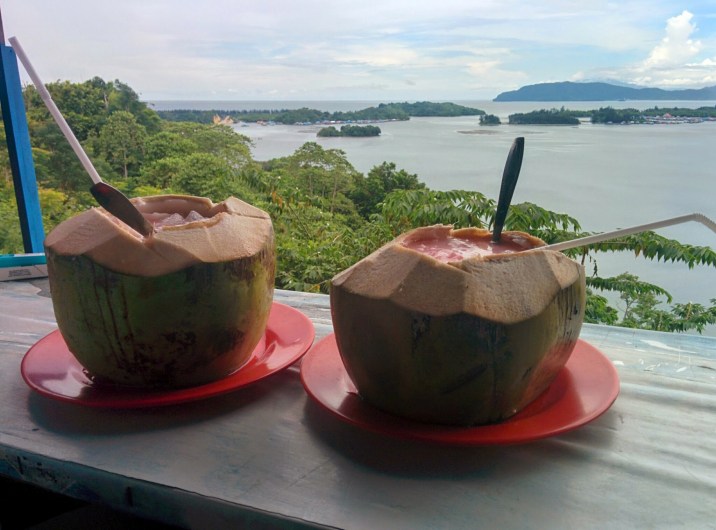 A rest-stop snack near Jayapura

Yet Papua is like nowhere else on earth. To the west hides some of the world’s greatest scuba diving in Raja Ampat and the Bird’s-Head Peninsula. At Cendrawasih, whale sharks frolic and play in the shallows just metres from the beach. And to the south, within the central east-west spine of mountains that divides New Guinea in two, lies Puncak Jaya, the highest mountain in Oceania. Located just 4° below the equator, the glaciers on its slopes will have disappeared by the end of this decade. Within a single province, Papua encompasses alpine tundra, montane highland forest, dense tropical jungle and fabulously diverse coral reefs.

Jayapura’s deep blue water and emerald jungle peaks, its jumbled buildings and frantic bemos and restless development, are no different to the rest of Indonesia. But for the first time in my months in Indonesia, alongside ethnic Indonesians I saw smiling Papuans, with jet-black skin and wiry hair. The city had a strange frontier feeling, as if no one was used to urban life: gangs of bare-footed Papuan boys wandered the harbour. The main roads were full of police checkpoints.

Couchsurfing: a taste of home

My Couchsurfing host, Indra, was a larger-than-life Indonesian who had grown up in Jayapura. His house was like the infinite hotel, each day offering a new family member with a fantastic story to tell: the sister from Nusa Kambangan, the prison island where the Bali Nine were awaiting execution; the brother-in-law who was a general in the Indonesian Army, posted to Jayapura to control the OPM; the mysterious Papuans they had adopted.

We spent the days exploring the city on Indra’s roaring Ducati. We climbed a hill to the huge rusting letters ‘JAYAPURA CITY’ overlooking the bay, sipped sweet kelapa muda with ice and sugar at the roadside, trained alongside Persipura football club in Mandala Stadium, and relaxed on the floor at home while Indra’s family quizzed me about the Queen and my taste in rambutans. He was a fabulous host. Belonging to a family again – even for a short time – is the greatest respite for any traveller. 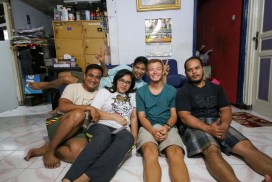 My lovely Couchsurfing host Indra and his friendly family 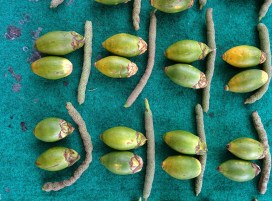 Betel nut (penang) is sold everywhere in Papua, lined up in orderly rows on neat stalls by the roadside. 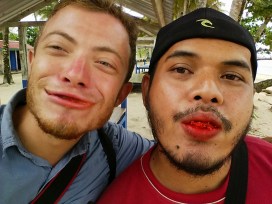 My first attempt at chewing penang was far less successful than it was fun. Indra was a pro. 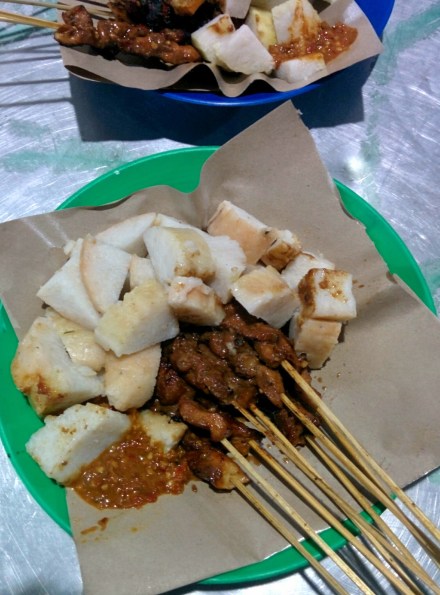 Last ever dinner in Indonesia: satay and rice 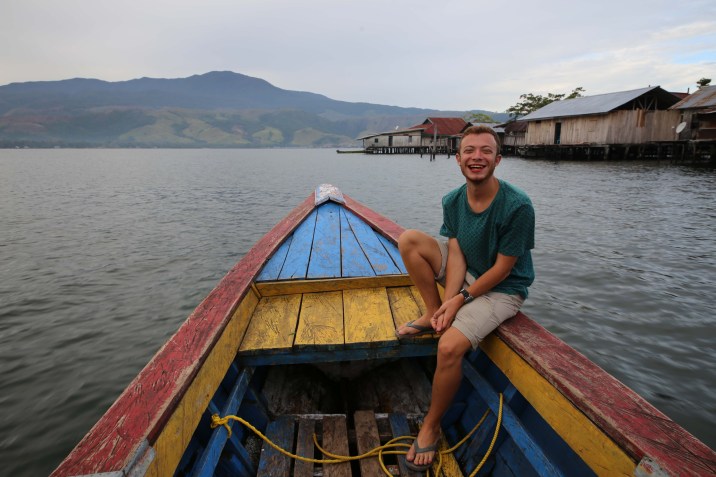 Indra’s sister is a wedding planner. Indonesian weddings are no minor affair: even the smallest have over 5000 guests. Indra runs the photoshoots from a studio packed with colourful traditional Indonesian costumes. I tagged along to Base G beach, site of the American landings in 1944, to watch a shy couple frolic in the waves in matching clothes and pose for photographs with lace umbrellas and a violin.

Near Sentani airport lies beautiful Lake Sentani, lined with quiet wooden settlements on stilts connected by rickety gangways. Indra, his sister, her two daughters and I hired a boat and relaxed on the water. I tried chewing betel nut, penang, a pithy fruit sold everywhere at the roadside with a small sachet of lime and a mustard bean. The bitter taste and copious saliva frothing from my reddened lips didn’t leave me longing for more; but it was good preparation for PNG, where it is the national addiction and scourge. 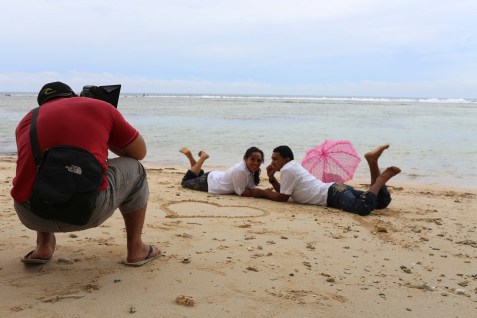 Lovers in the sand 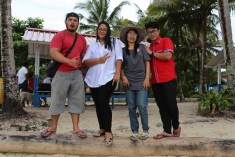 Indra, his sister and their wedding-planning team on Pantai Base G 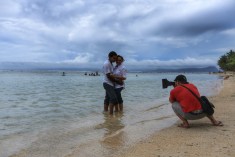 Indra was the photographer at his sister’s wedding planning business 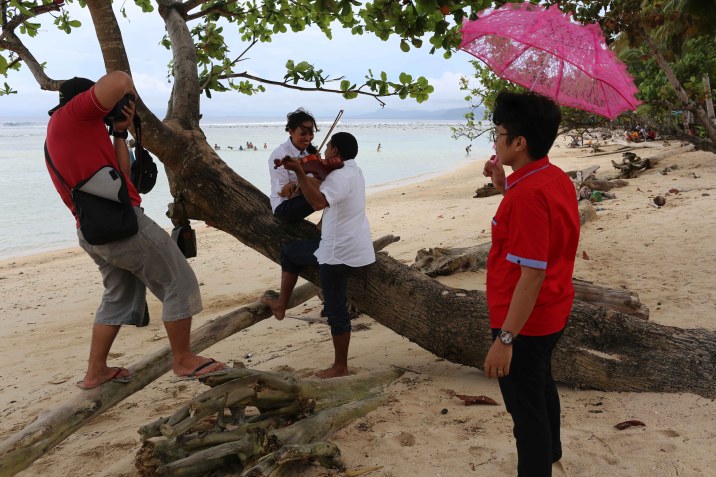 I was reluctant to leave Indonesia, this wonderful country of tradition and technology, beauty and brutality, so I made the foolhardy decision to overrun my Indonesian visa and visit Wamena in the heart of Papua. A few days later I was back again with Indra. I said goodbye to his tearful young sister – she wrote me a sweet letter addressed Untuk kaka Max, Dear brother Max – and I set off for the adventure of a lifetime in PNG.