A short walk in Baliem

Wamena is an ugly frontier town that leaves you itching to escape into the pulsing jungle which surrounds it. And so, one bright morning, with a huge bag of nasi goreng in my rucksack and a map drawn in biro on my arm, I set out on a walk.

My first stop was the caves at Wosilomo: even more ornate, gothic, dank and creepy than at Londa in Tana Toraja. The rotting planks petered out after twenty minutes’ walking and I carried on for another half hour, slithering over wet rocks with a tiny headtorch until the tunnel bifurcated and I took fright. 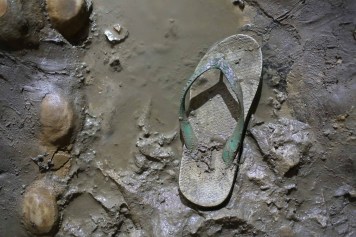 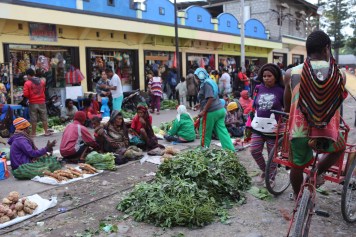 The further I walked, from Wosilomo to Yomosimo, higher to Widangku and beyond, the road grew better and better. Soon I was jogging along brand new tarmac as trucks loaded with rocks or people rumbled past. I jumped on the back of one truck and we climbed into the chilly fog, emerging in the next valley to see what I least expected: below, there were roads, metal roofs, telegraph poles and churches – the developed world was back. How quickly illusions can be shattered! No onai, no kotekas, just an outpost of Indonesian civilisation in the jungle. This was the Pass Valley, main settlement Elelim, a world apart from the paradise of Baliem. I don’t know why I left so quickly. I knew this place existed but I had been much happier suspending my disbelief in Baliem.

I spent the night in a strange complex near Widangku in a half-built prefab shed next to an onai. The morning was freezing and I was woken by two boys playing with a pair of birds whose legs they had tied with string like grotesque kites. The mother, smoking the typical Papuan newspaper cheroot, nursed her baby and sorted through mouldy rice.

We struggled to communicate – the family barely spoke Bahasa Indonesia –but a friendly young man called Wampo offered to show me the way over the mountains to Jiwika. He rushed off to get some sunglasses, flip-flops and a bushknife and, properly equipped, led me at a storming pace through the steamy jungle. We passed Air Garam, a saltwater pool where Dani women were soaking strips of cloth. 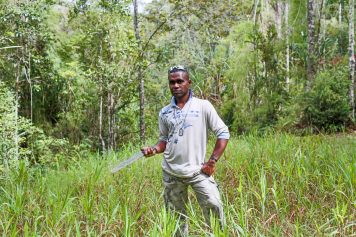 All Wampo needed to guide me over the slippery ridge was some flip-flops and a bushknife. He was still far faster than I, of course. 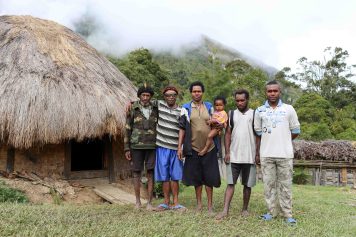 Church in the wild

Bidding farewell to Wampo, I stumbled into a church service in a tent. Century-old races jostled with modern faces as they listened to a priest in black robes. Bare-breasted women in body paint stood next to wiry Indonesian men in rumpled suits and shiny-faced Chinese girls in satin dresses.

After the service, I gorged myself on a buffet of chicken and boiled ferns. I was the centre of attention. An imperious Papuan man with a splendid beard introduced himself: “Mr Jafeth Saroy, at your service!” He continued in a confusing mixture of French and Dutch and invited me stay the night with him. 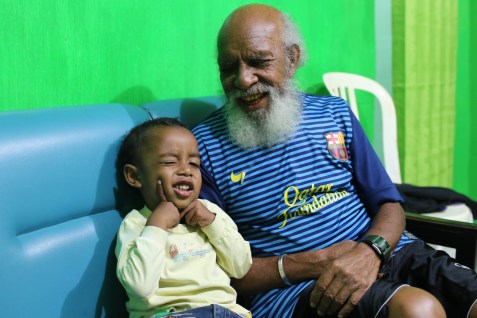 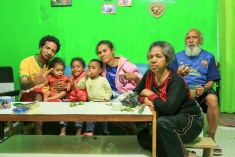 Jafeth, his wife, son, daughter-in-law and grandchildren were wonderful company on my last night in Wamena. Even the baby girl was given betel husks to chew. 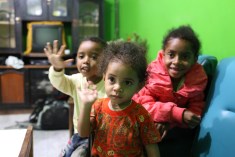 Jafeth was a Methuselah with twenty-three grandchildren. I visited him that evening. Presiding over everything in a bumbling mixture of languages, he smiled beneath an enormous beard and told epic stories of his eighty-three years in Papua and abroad. His wife was a bustling old lady, her teeth and lips stained blood-red by betel, and we chewed together as she cooked a classic Indonesian feast of twenty packets of instant noodles. They all spoke well of OPM, the Papuan independence movement. Jafeth made me promise to send him flower-bulbs from Europe.

Soon, after a rattling flight back to Sentani and a Rp 1.2mn ‘fine’ for overstaying my visa in Jayapura, I bade farewell to my Indonesian friends and headed to another world, one even wilder than Indonesia: Papua New Guinea.