The other side of Indonesia: Baliem Valley

Wamena is a hot and dusty town in the Baliem Valley on the edges of civilisation in the deep interior of Papua. Our wobbling aircraft, brimming with fresh fruit and essentials from the outside world, flew low over virgin jungle and touched down by a rusting shed.

Getting there: Trigana flight from Sentani or Timika
Escaping: walk or bemo from Wamena (remember your surat jalan); walk to Freeport (if you dare)
Bureaucracy: visitors must obtain a surat jalan from a police complex five minutes’ walk from the airstrip

The Heart of Darkness

The Papuan interior is one of the wildest places on earth. Undeveloped, sparsely populated and largely unexplored, the region hosts at least forty uncontacted tribes in a fragile sweet-spot forgotten by the authorities. To the east, the Indonesian army is distracted by a bloody conflict with the Papuan independence movement (OPM), regularly making incursions into refugee camps to terrorise ethnic Papuans; and to the south, the government’s attention is focussed on industrial projects like the environmentally disastrous Freeport copper mine. In Wamena, the people’s appearance differed little from the Torres Strait Islanders I had met in Townsville. Like the journey their ancestors took thousands of years ago, I had been describing an arc around the Arafura Sea.

As in Australia, the native population seemed ashen and destitute in the city, selling fruit and string bags from the gutter in front of tourist shops run by magisterial Chinese immigrants. But in the countryside, these people were a force of nature.

Wamena has an uneasy feeling. Walking its unsettled streets at night was the first time I felt threatened by Indonesia. A friend of a friend recommended a horrid, overpriced Chinese-run hotel where I spent a terrible night, bolt upright in my windowless room to the sound of breaking glass and a woman’s screams in the foyer outside. 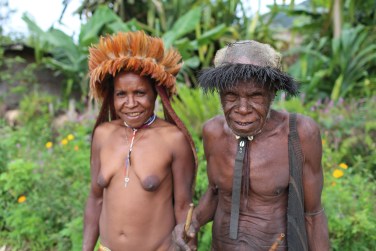 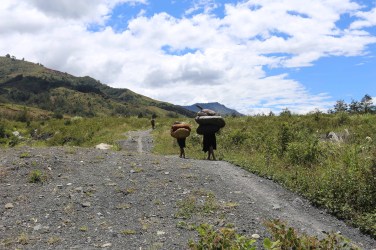 The Dani have an unshakable love of sweet potatoes. They carry them across their backs in huge stretchy noken, woven cork bags. 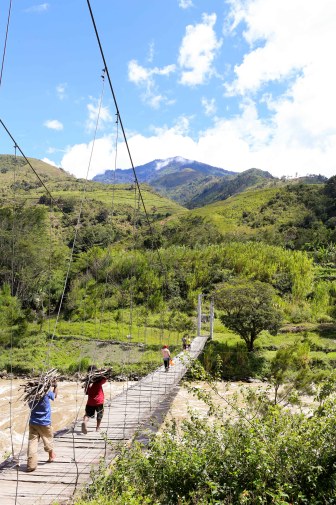 A walk in Baliem

On a beautiful morning I took a rattling PMV from Terminal Misi towards Sumogko and walked for hours through the countryside. The fields were intensively farmed, dotted with round onai huts surrounded by birdsong and tinkling streams. Friendly Papuans sang si-ang! as they trudged by with string bags, sweet-potato bulging, slung over their foreheads and onto their backs. Past Kurima, the police checked my surat jalan at a checkpoint – petty bureaucracy is never far away in Indonesia! I rested above a rickety suspension bridge spanning the river-valley.

I met a lady selling fruit: all the fingers of her left hand had been cut off to the knuckle. It is Dani custom to remove a finger each time a relative dies.

After a few days in Baliem, I set off on an exceedingly ill-planned attempt to reach the next valley to the east.