Into the Highlands of PNG: Mt Wilhelm

In a country of impossibly remote villages and impassable roads, the Highlands are the final frontier and Mt Wilhelm is the peak. Early colonisers of Papua focussed their attention on the coasts, where transport was easy and the natives were willing to trade. They were oblivious to the fertile plateau hidden among mountains in PNG’s interior. When twentieth-century explorers and prospectors like the Leahy brothers first began to fly over the continent, they were astonished to find an area that was densely populated and heavily farmed. When you visit the Highlands of PNG today, you visit a place where, less than a century ago, millions of people lived in complete isolation from the modern world.

From Madang to Goroka

Before reaching the Highlands, exhausted after weeks in the steaming jungles of the Sepik, I found myself in Madang. Once a coastal retreat for colonial explorers, then razed by the Japanese in 1942, sleepy Madang is recovering its old charm. Luxuriant trees line the coastal paths, their branches thick with bats hanging like fruits. At dusk, they come alive and the smell of jasmine fills the air. Of all the places in PNG that the locals had warned me to avoid (more or less everywhere) Madang was surely the nicest.

I stayed at a pristine Lutheran guesthouse where I delighted in running water and clean sheets. I went scuba diving on the wreck of an American fighter jet. Soon, though, I grew tired of the luxury and turned my gaze inland. 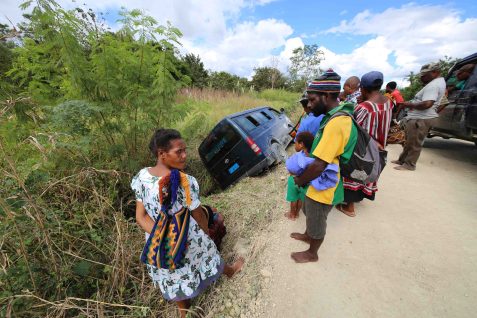 To the roof of Papua New Guinea

Waking in Goroka, a large town halfway up the Highlands Highway, I felt renewed. For the first time in more than a year in the stifling Tropics, I saw my breath curling in the morning air. Nestled at the head of an airstrip among dewy mountains was a neat town, the people bright and proud. Their market was bursting with fruit and vegetables and, at the University of Goroka, I chatted to happy students. They invited me to a business lecture, which was excruciatingly dull – some things never change.

From Goroka, I pushed further northwest through steep passes and rain-soaked villages towards the foothills of Mt Wilhelm. Somehow, with no warm clothes, no sleeping bag, after months at sea level (often below it!), I decided to climb the highest mountain in Papua New Guinea. At 4509m, Mt Wilhelm is some 300m lower than Puncak Jaya, the tallest peak in Oceania, but is a serious prospect nonetheless. I met a man called Joe on the bus to Kundiawa. He had a winning smile and no shoes – who better to lead me to the summit?

Joe boasted that he knew the summit route from memory and could read the weather like clockwork. Soon after, as we stood lost in the pouring rain on our first morning’s climbing, I began to have my doubts. We did eventually reach Pindaunde Lakes and joined two villagers in a wooden shelter to dry our clothes by the fire and eat beef crackers with tinpis. We struck off for the summit at 1am and my faith in Joe was restored as he nosed through the slippery darkness. The moon lay hidden behind the mountains and stars twinkled in the lakes as we left them behind. At 6am, we reached the summit and all of PNG lay around us, blanketed in cloud and azure light.