Raskols and missionaries in Lae and POM

If the Highlands of Papua New Guinea are the country’s breadbasket, then busy, sprawling, industrial Lae is the workshop. In a single journey, as the bus rolled downhill through fertile fields to swampy coastal jungle, I went from tribal warlands to a chaotic modern city.

I had barely left the bus before someone invited me to stay. Charles was an interesting and educated man, born in the Highland province of Enga where he met his wife, Doreen. Alongside his job in Lae as a manager at Digicel, the national mobile network provider, he leads a community faith group; he preaches on the weekends; he owns a shop; he is building two houses in his backyard, the plots carefully marked out with string; and he is running for election as a Member of Parliament for Lae. Charles and Doreen’s hospitality was warm and boundless. He told political stories and asked about my life at home while Doreen cooked mountains of rice, fish, chicken, and Highland vegetables while fending off countless lively children. Everyone fought to use the one working plug socket to charge their mobile phones. Charles and his family in Lae 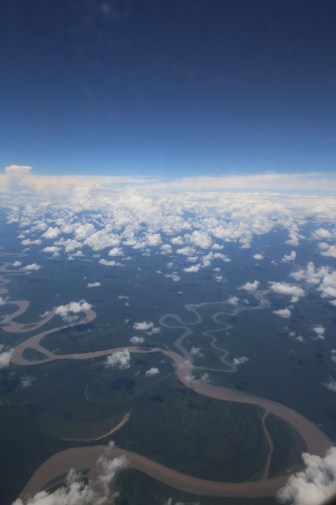 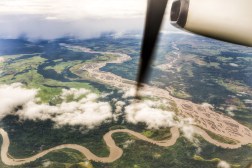 Charles and Doreen at their home in Lae

Arriving in Port Moresby, I found myself at the end of a long, unbroken path that had led me from Jakarta in western Indonesia to the heart of Polynesia. Scruffy Moresby – city of night-wandering raskols and intense corruption – presented the full spectrum of people that I had encountered on my journey, from enterprising South-East Asians to hook-nosed Highlanders, waddling Polynesians and inscrutable Islanders.

In Kira Salak’s travelogue Four Corners, she describes Moresby as a city of barbed wire. For a people used to living in extreme isolation, whose culture precludes speaking even to the neighbouring tribe, the modern challenge of mass migration to Moresby has been difficult to bear. The streets are full of mistrust. It’s visible not only in the weapons people carry or the shops, which are locked, gated, and guarded even when open. It’s visible in people’s faces on the bus and the way the packs of young men drift aimlessly on the streets.

Even if it was not a happy place, I was proud to have reached Moresby. I stayed with two American missionaries, Cheryl and Michael, clean-cut, Bible-toting folks who had just left New Britain. Michael wore button-down shirts and had a warm handshake. Cheryl’s crucifix earrings swung as she talked. We were joined at the dinner table by a pilot from Florida who had ‘felt a calling’ to join SIL International, a Christian non-profit trying to translate the Bible into every language in the world (which makes PNG, with over eight hundred languages, a good place to start). He encompassed all the strange forces which have shaped the West’s interactions with this country.

The Parliament building, itself quite beautiful, was in a muddy, half-built district full of self-appointed security men and buai vendors sitting on the pavement. A well-dressed man gave me a tour of the Chamber. Nearby, in a mall, a group of boys followed me through sterile shops shouting, Whitey! Ela Beach was empty and squalid, overlooked by expensive homes. The Central Business District was a glorified construction site occupied by shifty-looking men. I soon grew bored, returning, at dusk, to dine with an obese Methodist minister from Bath whose mission in Rabaul had been cut short by an earthquake after just two days. Perhaps fittingly, he had been trapped in a supermarket. I felt confused by all this Western company and longed to be in the Highlands again. We traveled to the airport together the next day: he to go back to Bath; I, to Auckland. 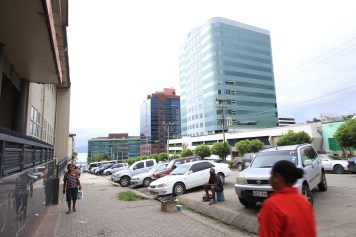 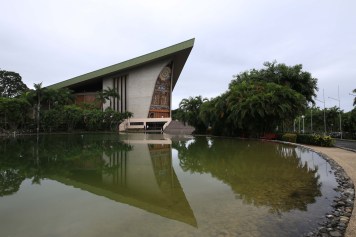 The Parliament building in Port Moresby